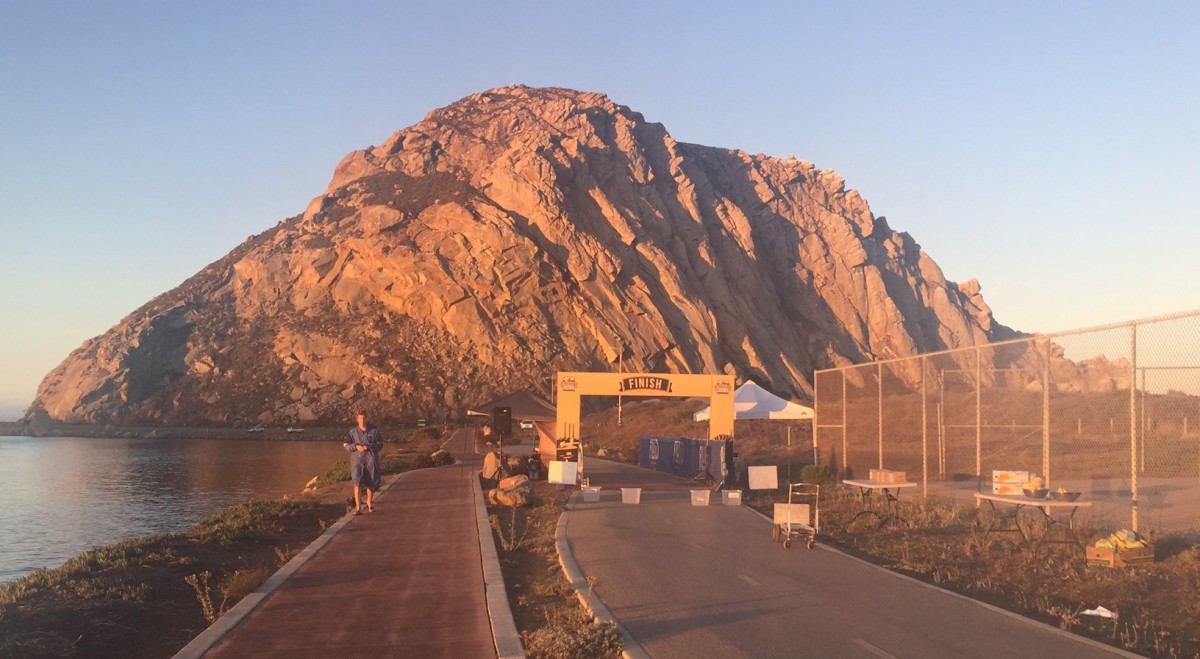 Quick note: anything ‘rock’ related was fair game for jokes this weekend. Detour on 101? Rock Road. Instagram topic? Dwayne Johnson. Looming geological feature which Mom and I spent hours reading about on Wikipedia? Morro Rock (it is actually super cool). Really – all we talked about this weekend was ‘rock’ in all its forms. Except when Mom (aka the super-sherpa) found a Great Blue Heron and was very sad she missed a picture and then was super-ecstatic when he was there a few minutes later.

I got to race with my best friend! We found the Morro Bay Triathlon and realized it was halfway between San Francisco and Los Angeles – perfect. Our moms came out with us and we were going to be able to hang out and enjoy the race atmosphere! I hadn’t been to Morro Bay before, so this was going to be pretty cool. I met the Race Director, Kaori Funahashi, at the Bearathlon in Berkeley (whoops, still haven’t done a write-up on that one yet, either). She ran a fantastic race! Plus, bonus: as a professional photographer herself, she clearly picked a rockstar team at Captivating Sports Photos – this is the first time I’ve ever purchased photos from a race.

Fun fact: I got super sick the Friday before this race. Major head cold. It sucked. But adrenaline is a magical drug.

Packet pick-up was super easy, and very relaxed, the day before race day. I got to walk around the harbor with my mom, and there were otters everywhere. I had seen otters in the Monterey Bay before, but usually they’re pretty far off shore and not easy to spot – these guys were mere yards away from us! If seals are dogs of the sea, then otters are certainly cats. They’d pop up vertically like a buoy, stare at the people on the path, and then dive back down… so cute. But, surprise, we’d be swimming with them the next day.

We stayed at a casual motel-style hotel right in downtown Morro Bay, less than a mile from the Transition Area. Easy to get to! I got to the race start shortly after transition opened – easy – and got a great spot on the racks. They definitely filled up, but I noticed this was a first-triathlon for a whole bunch of athletes, so a lot of people were taking up a lot of real estate. I love being at the end of the rack because I don’t need a lot of space in depth, but I can spread out the whole length of my bike!

I have put up with a lot in the world of swimming. I’ve had arm hair burn off from the pH, I’ve swam in pools without a “T” and slammed by heels into the gutter (yes, that hurt just as bad as you imagined), and now I’ve done a two mile OWS race with no wetsuit in Keller Cove – but holy mother cow, this water was COLD. Kaori said it was 58* – it was supposed to be a wetsuit-mandatory swim. I really shouldn’t complain though – the water was magnificently clear (for California, ok?) which honestly bothered me because I think I prefer to just pretend like I’m not in the ocean, but wow. Please go to Morro Bay. It’s disgustingly gorgeous.

Ok. Besides being cold, and having to get in and ‘warm up’ by getting so cold I thought I lost my nose, the swim went really well for me! Lizz and I started off with another woman up in front. The third woman dropped off about 2/3 of the way to the first buoy. Lizz totally beat me on the turn at the buoy, but somehow turned a little too tight and swam right into someone behind us in the wave. I saw this happen – I breathed to my left and saw her off-course and watched the crash, and tried to holler at her to get back over by me – but she knocked her goggles out of whack. I kept on going, and she caught back up with me pretty fast (unless that was the other woman who was with us? Still don’t know for sure). We caught up with the men’s sprint wave pretty quickly, about 1/3 of the way between buoy 1 and 2, but the traffic was pretty dilute.

I made the final turn into the beach, had a quick entry, and was up the dune!

Lizz found me in T1! I sprinted in, and was trying to pull on my bike cleats when I heard her holler – I thought to myself, pfew she fixed her goggles, we’re gonna have a RACE! I was quick out of T1 – shout-out to a certain member of OTC for making me practice!!

If I had a bike trainer, I imagine riding that would be like this bike leg. This course was smooth, relatively flat, and really fun. Cool ocean breeze and views the whole way, easy turn-around, and a (mostly) closed course. I had some issues at the sprint turn around, and I know Lizz got caught at a stop light, but otherwise, no complaints.

I felt really strong on the bike – and judging by my time, I’d say I performed pretty well too! Really stoked that this went so well despite being sick. No snot rocket issues here!

Again, thanks OTC for making me practice my transitions. Speed laces made this super fast. I even remembered my bib belt (really glad I didn’t make this a habit)! Really glad I grabbed my visor, because it was BRIGHT on the beach!

Running is hard. Running in the sand is even harder. But I felt the best on this run out of all of my triathlon run legs so far! I may not have been moving very quickly, but I was moving, I was mentally strong, and I didn’t cramp. It was a little bit of torture to have to run in super loose sand before hitting the end of 1 KM. That sucked. And the sand on the beach wasn’t quite as hard-packed as I’d expected, but I made it, slowly but surely.

About 1 KM from the finish, I was passed by a 75-year old man (thank you, triathlon, for requiring we put our ages on our calf!). We had just made it out of the looser sand and back into the harder sand, and he expressed exactly what I was thinking – thank GOD we are back in the hard-packed sand! I wish I could have kept pace with him, but that will (maybe) come with practice.

Finally made it on the paved path toward the finish, and just like my mom had said that morning – the path was way longer than it looked. I tried to hold speed, hold speed, hold speed… made it through the finish arch! Photographer yelling at me to put my hands up! KJ tries to put her hands up and promptly forces them back down to keep vomit in mouth! Aaaaand I’m done. No spewage, held it together, and found my mom (who was screaming at me as I ran to the finish)!

I finished a few minutes before Lizz – turns out her bike couldn’t shift gears (ugh) and then she lost a contact as she tied her shoes (UGH) – but she did fantastic despite her setbacks. I got to watch her come in to the finish, and she looked the strongest out of all the finishers by far! Arms were pumping, knees high, she was moving. Super inspiring!

After feeling let down at Oakland, I feel vindicated. I had a fantastic race in Morro Bay. It was kind of a funky course – not conventionally tough in the swim and bike, but a strategically tough run – but I loved it. This was seriously a fantastic race. I am really happy with my results!

The age groups were split into ten-year groupings instead of five. I finished second in my age group, and seventh overall – sweet!

Hey, I'm KJ. Triathlon is the first time I've felt truly passionate about something since my swim career ended. View all posts by KJ

Next race report catch up: Dwight Crum Pier to Pier open water swim. 2 miles from the Hermosa to Manhattan piers. This is a shot from the women’s start (and not the front line). It was awesome. Link in bio. . . . #triathlete #racereport #openwaterswimming #triathlon #openwaterswim #race #throwbackthursday #tbt #ironman #im703 #ironman703 #dwightcrumpiertopier #piertopier #swimbikerun #racing #swimmer #swimming
Finalized my race report only four months late. Realized I smiled through every leg. Link in bio. Let’s get 2020 going already, please! . #triathlon #triathlete #racereport . . #openwaterswimming #triathlontraining #im703training #racelocal #throwback #timetrialtuesday
On the surface, the same. Still a @blueseventy race suit, still @speedousa goggles. But the past 10 years have made me ME a whole lot more than the 18 years before the picture on the left. Grateful for the opportunities and challenges (wish some of the truly shitty stuff could have maybe been not so shitty but here we are). . . Never thought I’d do a triathlon (I vividly remember the first time I ran 5km straight). So grateful for all the connections I’ve made and the chance to have so much fun in my free time!! . . #triathlon #10yearchallenge #triathlete #triathlontraining #ironman703 #swimming #swammer #swimbikerun
Dr didn’t quite clear me yesterday but did tell me, “follow the PT and keep your butt strong” (not paraphrased). No running yet but have been cruising on the AlterG (anti-gravity) treadmill, can ride outside very soon, and can re-introduce kicking in the pool in 3ish weeks. #BUTTSTRONG (see you in the gym!) . . It’s been a rough 5 weeks since the crash but I honestly have had it so much better than other people. Still bummed I didn’t get to experience my first 70.3 but looking forward to coming back next year!! . . What races are on your schedule and what should I target?? . . Thanks to all of my friends who have supported me this past month! I so truly appreciate you reaching out and checking in and offering to couch hard with me ♥️ . #triathlon #offseason #running #recovery #swimbikerun #rearview #triathlete #trilife #trilifestyle #monteriotriathlon