We’ve lived in Colorado for a whopping 6 weeks, and in that time, I am pretty sure we’ve seen every season. It snowed the first week we were here; it was beautiful but rained in the afternoons; and now the days are easily in the 90s by noon. My body is all sorts of confused, as is my training.

As I’m still figuring out my work schedule, the heat has been super surprising in the afternoons! Been working through my heat acclimation – slow, short runs and heavily-hydrated rides. But it’s such a shock to the system!!

Looking forward to any additional recommendations on handling the heat at elevation – leave me a comment or send me a message!! Best of luck on your training this summer!

Where do you really start when something you planned to conquer 18 months prior got pushed out and pushed out…and then finally happened?

If you allow me to rewind a few years, I pulled out my first triathlon “goal” sheet from 2016. This was my first experience with setting goals for something I wasn’t good at – I’d set goals loads of times for swimming where I knew what was reasonable.

END_OF_DOCUMENT_TOKEN_TO_BE_REPLACED

A good coach knows when to be serious and when to lend a smile.

The balance is unique to each athlete, and a coaching skill honed only by on the job experience. And I am incredibly excited to announce that I’m officially ready to be the sometimes serious/sometimes silly coach for you! Coaching was my first calling all those years ago, and to have the formal USAT stamp of approval as a Level 1 coach is the icing on a long-time-in-the-making cake. Consider this the official ** KJ IS AVAILABLE TO BE YOUR TRIATHLON COACH ** announcement!

So what’s available? Races are looming on the horizon and your plan is leaving a lot to be desired, and maybe your pools still aren’t open, and maybe you’re just looking for a little guidance on structure. I would LOVE to be your resource to get you on track to plan out your season, or back into swim shape, or build a fully custom plan to help you achieve your 2021 goals!

Feel free to contact me here or you can reach me by email at swimcyclesprint@gmail.com if you have any questions or are interested in learning more! I feel so fortunate to have the opportunity and ability to pursue my passion as a coach. I’m thrilled to have a chance to work with everyone interested in taking your training to the next level – regardless of your current experience or fitness.

Picture this: eight-year-old KJ, hanging on the pool deck at the end of a lane, staring up at my swim coach and trying desperately to figure out how to do the drill she was explaining.

I adored my swim coaches growing up. I just wanted to be like them. They knew so much, cared so much, and were just the coolest. Our head coach instituted a “Junior Coach” program, which meant that when swimmers turned 13, we were able to prepare, interview, and learn to be a coach – obviously I jumped at that opportunity after dreaming of joining summer after summer.

After coaching swimming every summer for nine years, I entered the “real world” and gone was that creative outlet. When I found triathlon, I jumped at the opportunity to coach swimming with the Oakland Triathlon Club, but then the “real world” caught up with me again and I had to stop due to conflicting schedules.

Two and a half years ago, I almost lost my involvement in endurance sport due to “real world” commitments – I learned that lesson quickly, and jumped back in. While you can’t truly “coach” yourself, you sure can train yourself. And in the process, make a whole bunch of mistakes and find a whole bunch of good strategy.

In 2019, I decided I would pursue the USA Triathlon Level 1 Coaching Certification – and then in 2020, the world decided to flip upside down. Despite that, USAT offered virtual training, and I was able to push up my session by almost a month and a half. And as of this week, I’m considered officially ‘certified’ by USAT as a Level 1 triathlon coach!

Far beyond the paperwork, I find coaching to be the most rewarding and exciting way to work with people. At the end of the day, we’re all still the same kids wanting to learn and grow and develop, and I’d love to be a part of your endurance sport team. You can always reach me at swimcyclesprint@gmail.com or via Instagram @swimcyclesprint.

A soggy but successful race. 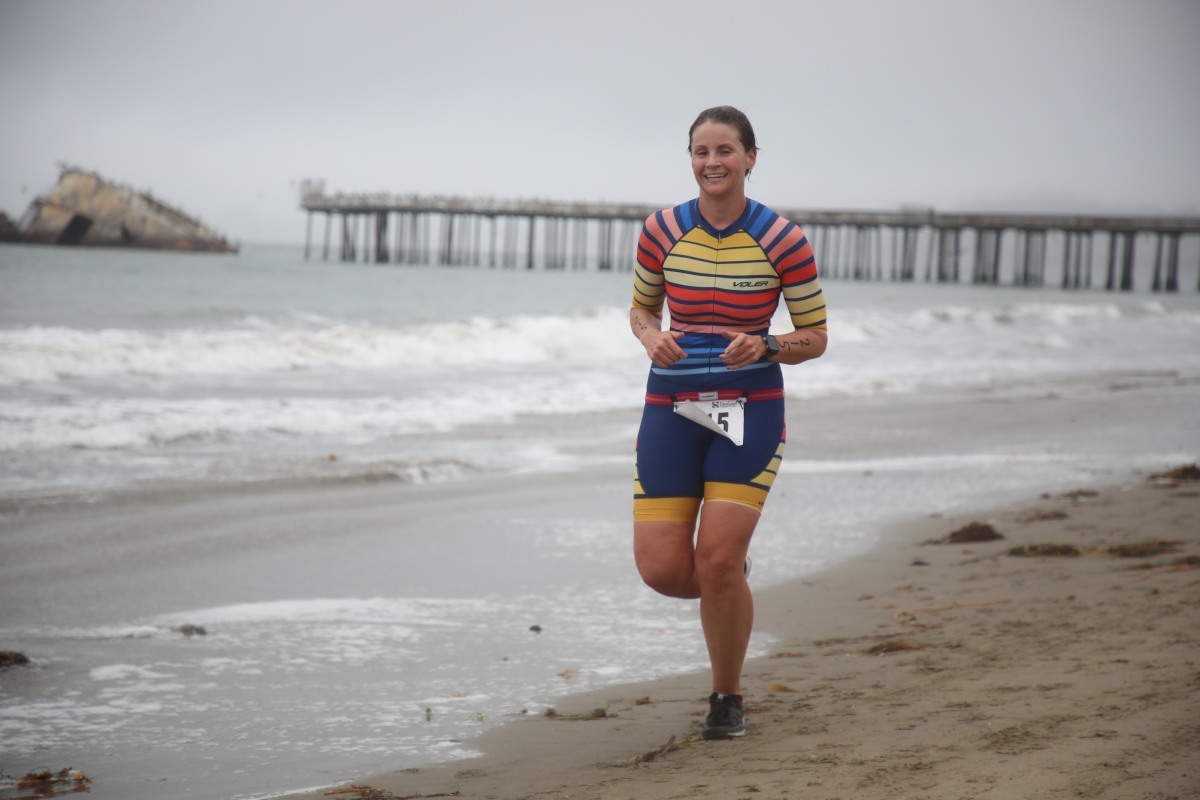 Fundamentally, I don’t believe in PRs (personal records) in triathlon. I mean, sure, you can declare your PR for a sprint / olympic / half / full, but so what? The course is different year to year, distances aren’t standard, and especially in the Ironman world, it’s not a time trial.

That said, I had a very good race on this course this year. Good indicators (and some would say a PR but… not) across all disciplines. I wasn’t sure how this race would go, as I technically ‘trained through it’ – though it happened to align with a recovery week.

END_OF_DOCUMENT_TOKEN_TO_BE_REPLACED

I returned to Aptos for the third year in a row for the 32nd Sandman and was once again thrilled to toe the line.

After some upheaval in my day job the week prior, a wedding in Lake Tahoe the day before, and general stress around equipment, cars, and commuting, I was not sure how this race would go at all.

END_OF_DOCUMENT_TOKEN_TO_BE_REPLACED

The Russian River is an amazing place. The past two winters, while California struggled in a long drought, rainstorms upstream turned Guerneville (former home of the swim start for the Vineman) and Monte Rio into Atlantis – that is, they were momentarily underwater. These towns are used to the river overflowing its banks, however, and are resilient. Monte Rio was quiet as ever (though overrun by a bunch of triathletes) as I prepped for my second Olympic distance race.

END_OF_DOCUMENT_TOKEN_TO_BE_REPLACED

USAP’s Half Moon Bay triathlons are a great season opener. Dust off the cobwebs, get out the creaks and cracks, and remind your body how to move fast.

For me, HMB was my first race after the first off-season filled with consistent training in my life. I started working with Mitchell Reiss and ETPA last fall and pushed to relearn how to run over the winter. By April, I wasn’t expecting miracles but I also wasn’t quite sure how to set a goal for the race – especially when it came to my weakest leg, the run.

END_OF_DOCUMENT_TOKEN_TO_BE_REPLACED

Reliving those #finishlinefeels 🙌 from what feels like so long ago! (But was just 6 weeks ago!) 3rd overall female felt SO good!!
Feeling a bit like I got run over by one of those trucks… hot one today in Boulder. Had 6mi in zone 2 on the docket and I made it 4.5 before I had to pull the plug to make it to work on time. Had to stay real easy to stay in Zone 2 today! Not my best run, but so goes base training.
I won’t lie, I’m a little down that I don’t get to join the world class athletes competing this weekend at the #im703worldchampionship in St George. Qualifying was a big goal of mine, and I came up just a few spots short.
Remember when it was cold enough for sleeves? I’m actually looking forward to a change in seasons this year - because we should actually see a change!! I’m sure I’ll just be saying this until the first snow hits, but bring on those Colorado winters!!
My favorite feeling in racing: swimming off the front with clear water!
Going fast is just more fun!! Putting in the work now to build a good base for the next big effort! Happy these gorgeous roads are so close to home, just looking for the AQI to clear up so we can take advantage of them 🤙 ‘til then, we #zwift !
Loading Comments...